During the writing of The Spriggan Mirror, from April through October of 2005, the novel's eventual fate was uncertain. For much of that time I wasn't sure it would ever be finished, let alone who would publish it. The possibility that I would put out a self-published edition through Lulu.com was very real. (I hadn't yet found better routes for self-publishing. In fact, most didn't exist yet.)

I was also getting a lot of feedback from readers with suggestions, speculation about where the story was going, corrections of typos and continuity errors, and so on. 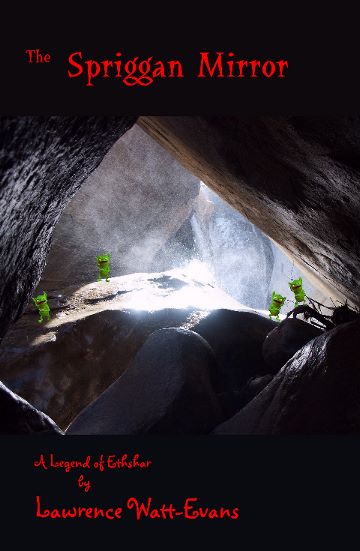 This resulted in two covers that will never be used.

Fan Dave Innis worked up the first cover, using the Del Rey trade dress from the 1980s. I thought it was delightful. I liked it enough that I showed it to the actual publishers, but alas, none of them wanted to use it.

And when I was considering self-publishing, I worked up the rough draft of the second one myself.

But neither one was ever used.

(You can click on either image to see a much larger version.)