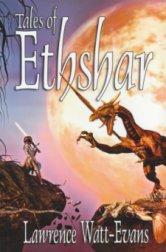 Tales of Ethshar is a collection of all the short Ethshar fiction I had published as of 2012, and it's still all there is as of October 2022, though more is in the works.

I hadn't originally intended to write short Ethshar stories -- but I hadn't particularly decided not to, either, and when Lester del Rey asked me to contribute a story to his fancy hardcover anthology Once Upon A Time, writing "Portrait of a Hero" seemed like a sensible response. I'd originally plotted the story with the idea it would be a novel in the 65,000-word range, but when I ran the idea past Lester he was sure it wasn't a strong enough story to support a whole novel. Rather than pad it out, I wrote it as a novelet, and the dam was broken.

After that, I wrote short Ethshar stories whenever the occasion arose, and right from the start people were asking me when I was going to collect them into a single volume, so readers wouldn't need to go chasing through lots of obscure anthologies.

I didn't have anything against the idea, but I also didn't have enough short Ethshar stories to fill a collection.

Until 2011, that is. When I added up everything after I'd written "The Warlock's Refuge," I realized I was getting close. And if I threw in the Ethshar version of "The Frog Wizard," and my 2011 April Fool's gag... well, it wouldn't be a very fat book, but it's a book.

So I filled it out a little with introductions, delivered it to Wildside Press, and there we are.

If there's any other information you think I should provide on this page, e-mail me and let me know.