Night of Madness was the seventh Ethshar novel. As experienced Ethshar readers will realize from the title, Night of Madness is about the advent of warlockry, and comes chronologically after The Misenchanted Sword, and before the other novels and most (maybe all, I'm not certain -- some have only vague dates) of the short stories. It does not reveal everything about warlockry -- every so often I hear from someone looking forward to reading it to get the real dope on warlocks, and let me tell everyone right now: You don't. Warlockry remains mysterious here.

(More is eventually revealed in The Unwelcome Warlock, though.)

It ran 560 pages in manuscript, about 130,000 words, which made it the longest Ethshar novel up until then, but not as long as Stone Unturned, or non-Ethshar books like Touched by the Gods or Dragon Weather.

Note: The following sample text is from a false start I eventually threw out, and isn't in the published version, but I thought it would do as a taste. The following prologue was the original opening; it's been removed, although a significantly-revised portion of the prologue was used in the epilogue of the submitted version. Note that the version here contradicts stuff implied in previously-published Ethshar stories -- what was I thinking?

The subsequent scene was originally intended to be the start of Chapter One. Nothing of it remains in the story except that I re-used two names for similar characters who appear very briefly, but unlike the prologue, it doesn't contradict anything and could still have happened. 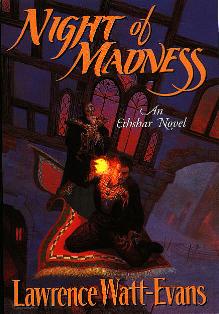 t was later established, by a commission of scholars appointed by the overlords of the Hegemony of the Three Ethshars, that the dreams began four hours and eighteen minutes after sunset on the fourth day of Summerheat in the Year of Human Speech 5202.
This seemed to hold true throughout the inhabited World; the dreams did not arrive any sooner in Aldagmor than in the farthest corners of the Small Kingdoms, nor did those who later became powerful warlocks receive them a moment earlier or later than those who never again showed any sensitivity to this new sort of magic. Everywhere, and for everyone, the dreams came at the same instant.
The effects, of course, varied widely.
A few reports from the handful of survivors in southern Aldagmor spoke of something that fell from the sky at approximately the same time, but since none of the witnesses interviewed had experienced the dreams--if they were awake to see the falling object they were not asleep when the dreams came, and very few dreamers so close to the Source survived--the commission was unable to establish just how close together the two phenomena occurred, whether the dreams began slightly before or slightly after the time of impact, or whether there was any direct relationship at all.
It was clear that the fall and the dreams did occur within a few minutes of each other, however, and that a relationship might reasonably be assumed for the purpose of further investigation.
Naturally, it was suggested that investigators should attempt to locate the fallen celestial object, but all magical attempts to do so failed, and three separate expeditions sent into the vicinity vanished.
Thus the nature of the Source remained a mystery.
Its effects, however, were all too obvious.

The old woman was seated comfortably on her porch, looking up at the river of stars that seemed to flow across the sky above her, when she saw the shooting star.
A shooting star was hardly unusual, but this one seemed to be bigger and brighter than most, and as Kara watched she became ever more astonished. She thought about calling to her son and his young wife, asleep inside the house, but hesitated--surely, by the time they could get out here it would be gone.
It did not simply flash over and vanish, though; it kept on going. Not only that, it was growing brighter all the time. Then it disappeared behind the clouds that had piled up on the eastern horizon. Heat lightning had flickered eerily through the clouds for much of the evening, but an instant after the shooting star vanished came a flash much brighter than any heat lightning she had ever seen before. She started, mouth open.
Before she could say or do anything more, the screams from the house behind her distracted her. Two voices, one male, one female, were screaming in terror.
She got quickly to her feet--or as quickly as her old bones would allow--and hurried for the door.
Just then the female screams stopped, and she hesitated. She didn't want to barge in on the two of them...
The male voice fell silent, as well.
She hesitated a moment more. She had no idea what could be wrong, or what she might do--but he was her son, and his wife was a good girl, even though she was less than half his age, and maybe there was something Kara could do, whatever it was that had brought on those screams.
She heard a thumping and a clatter inside; someone was definitely moving around, and she could hear hushed voices. She resolved to go in and see just what was happening, and was just reaching for the latch when the door slammed open.
There stood her son, stark naked, staring wild-eyed out at her--but she had the strong feeling that he didn't see her at all. He pushed past her, crossed the porch, and stumbled down the steps.
"Karn?" she called.
He didn't stop; instead he trotted across the yard.
His wife Imirin appeared in the doorway, wrapped in the quilt from their bed. "Karn?" she called after her departing husband. "Come back! It was just a dream!"
"What dream?" the old woman asked. "Where's he going?"
Imirin burst into tears as Karn vanished into the night, which struck Kara as odd--Imirin was not usually given to crying. Something more than Karn's odd behavior had disturbed her.
"I don't know," the younger woman said. "Somewhere out there--there's something there that called to us." She pointed to the east--just where the shooting star had fallen, the old woman realized. "I felt it, but then I woke up and I couldn't hear it any more, I just knew I should do something, but I didn't know what."
"Did Karn wake up?" Kara asked.
"I thought so," Imirin said, snuffling and trying to stop crying. "He spoke to me, said that he had to go, but I thought he was just talking about the dream. Then he got up and left. He didn't even take his robe, he just walked out!"
The old woman looked at her thoughtfully, then looked out where Karn had disappeared. Imirin still seemed even more upset than Karn's actions would justify, and Karn's actions, of course, were extremely strange.
Hardly inexplicable, though.
"He's under a spell," the old woman said. "He must be. That dream must have been part of it."
"But I dreamed, too," Imirin protested.
The old woman turned up a hand. "You weren't the one it wanted, I suppose. Maybe it wanted only men, or just one person." She sighed. "It must be a spell. I saw a fireball fall from the sky--perhaps a wizard or a sorcerer is in trouble somewhere."
"Do you think that's it?" Imirin asked.
The old woman nodded.
"Then shouldn't we do something about it?" Imirin demanded, clutching her quilt higher.
"What did you have in mind?" her mother-in-law asked. "I'm an old woman, and you're a girl wearing nothing but a quilt, not a year past eighteen--what are we going to do against a magician who can send dreams to summon help?"
Imirin bit her lip, but had no reply.
"The best we can hope for," Kara said, "is that either the magician will die before Karn gets there and the spell will break, or that he'll get the help he needs and send his thralls safely home again. I'm no wizard--not even a half-trained backwoods witch--and unless you and Karn lied to me, neither are you."
"I'm not," Imirin said. "Right now I wish I were, though! I wish I could just wave my hand and bring him back..."
She waved one hand while the other held the quilt--and to the astonishment of both women, a sudden gust of wind stirred the weeds and thin grass of the front yard, whipping straight toward them, blowing Imirin's hair back so that it slapped against the wall of the house.
She stared at her hand, astonished.
"Did you do that?" Kara asked.
"I don't know," Imirin said, wiggling her fingers experimentally.
Kara studied her carefully. "I think you'd better tell me more about this dream," she said.

So what's it about? Where'd it come from? Why did I write this one, when I told people after The Spell of the Black Dagger came out that the next one would be called Ithanalin's Collection?

Well, that was at Del Rey. Del Rey and I came to a parting of the ways, which meant delaying any more Ethshar novels until I was firmly settled in with a new publisher. I couldn't reasonably expect another house to simply pick up where Del Rey left off.

So I found a new home at Tor, settled in with two big fat fantasy novels, and decided it was time to bring Ethshar over -- but I wanted to start fresh after the long break with something big, a new beginning rather than just a continuation.

Night of Madness, which had been on my list of future projects all along, looked like the best way to do that. It's the story of a young nobleman in Ethshar of the Spices, Lord Hanner, who finds himself caught up in the chaos that results from the sudden appearance of an entirely new and unknown form of magic. I'm not sure what else to say that won't ruin any surprises. As I said before, I can tell you that it reveals more about the origins of warlockry, but doesn't Explain Everything.

I'll mention that I started the story over three times after realizing I wasn't happy with the opening, but I did eventually finish the thing, and am pleased with it.

I said in the original version of this page, "I don't really expect at this point that any characters seen in previous books will appear, but there are three who might possibly turn up somewhere -- Valder, Iridith, and Fendel. No one else." Sigh. I should know better by now. Serem the Wise, heretofore seen only in The Spell of the Black Dagger, appears briefly. Other minor characters from previous novels (often very minor) are mentioned, as well, and appear here and there. Oh, and Valder and Fendel never did show up; Iridith has a cameo appearance or two, not by name, and I suspect most readers, even those who have read The Misenchanted Sword, won't realize it's her.

As for Ithanalin's Collection, I did write it eventually, but retitled it Ithanalin's Restoration. It's the eighth novel in the Ethshar series, and was published in the fall of 2002.

After Ithanalin's Restoration Tor was not happy with sales on the series, so I switched to continuing it as online serials, which were then published by Wildside Press. After a few years I decided the serials weren't worth the trouble, so now everything goes straight to Wildside.

(If you have any suggestions for material I should add, e-mail me.)